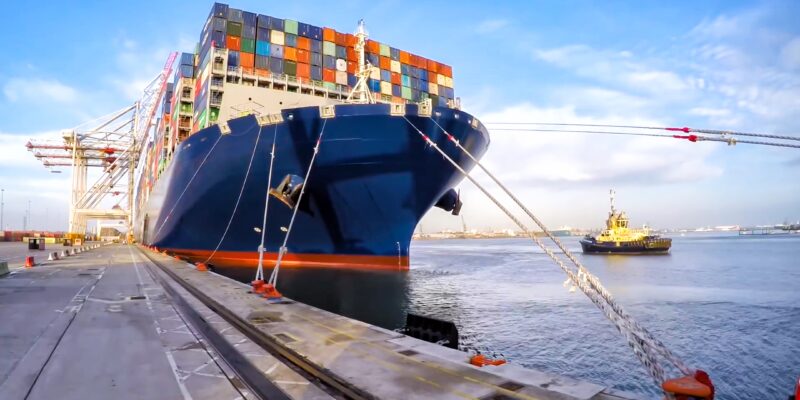 Transporting approximately 84% of volumes traded globally and nearly 70% of worldwide trade value, maritime logistics is considered the backbone of trade. The Latin America and the Caribbean shipping service industry, particularly in the South American and the Caribbean subregions, reflect similar ratios – suggesting that ports play a significant role in ensuring massive distribution of goods through supply chains. This includes goods that are considered essential, such as food and medical supplies.

In 2018, international trade carried by water reached 11.81 billion metric tons (Clarkson, 2020). Compared to 2019, there was a 0.4% year-on-year growth, with a total of 11.86 billion tons carried. However, in 2020, global cargo movement reached only 11.2 billion tons, resulting in a year-on-year drop of 5.2%. Based on these figures, the impact of the coronavirus pandemic on maritime cargo transport activity is predicted to lead to a setback of more than three years.

Over the previous years, about 17% of the world’s total maritime cargo was transported by Latin American and Caribbean logistics companies. However, despite this, their regional share in the marine transport industry is more diminutive. While most of the largest countries in Latin America had their own shipping companies, private or state capital, the impact of those that have remained in the market is much lower.

The sharp drop in exports from Latin America compounded by the rapid decline in Mexico’s export performance contributed to this overall decline in exports. Although exports from South America had grown by an 8.3% rate in 2018, the first quarter of 2019 only reached a 5.4% year-on-year increase. In Mexico, a 2.3% increase in exports represented a slowdown, which was primarily due to the slower growth of exports to the United States and shrinking sales to the European Union. Given the current situation caused by the pandemic, offering cost-eﬀective Latin American shipping services and cost-eﬀective Caribbean shipping services could be the key to improving the shipping scenario in these regions.

About 348 companies are based in the said region, and, according to UNCTAD, the fleet of vessels over 2000 GTi amounts to only 2% of the global total, representing 1.19% of the GT and 1.24% of the overall DWT. Separately, the GT share of Latin America is 1.09%, and that of the island states of the Caribbean are 0.10%; and their DWTii share is 1.17% and 0.07%, respectively. And so, while the region mobilizes over 17% of exports and global imports, its transport capacity does not reach 2% of the entire industry in terms of global scale.

Distinctive Features of Latin America and the Caribbean Shipping Industry

An analysis of a survey of 314 companies that were active as of April 2020 reveals some distinctive features of Latin America and the Caribbean shipping service industry – most companies are privately owned, with small fleets, mainly short-distance geographical coverage, and of diversified specialization. Of these surveyed companies, 94% of the ownership was primarily private, although there is a marked prominence of companies that were 100% private. Only companies operating at least one vessel of 2,000 or more GT were included, 86% of which had around one to twenty vessels. Within this category, 159 companies operated one to three vessels each.

Analyzing the geographical coverage of these companies reveals that 45% of them offered cabotage services, and 43% provided services to neighboring countries. Only 6% of these companies reached higher-distance destinations within Latin America and the Caribbean, and 6% provided services overseas. In terms of the type of vessels operated, 61% of the 314 companies surveyed were dry or liquid bulk, including oil and derivatives; 22% transported to supply container services; 7% were multipurpose; 3% corresponded to provide offshore services, and 2% to vehicle transport.

No Major Impact on Global Transport

Data from UNCTAD shows that Latin American shipping service companies and Caribbean shipping companies account for only 0.39% of container transport capacity, measured in TEU, of which TEU capacity of the subregions of Latin America and the Caribbean are 0.37% and 0.02%, respectively.

Analyzing the composition of the global fleet by country of domicile of these companies, the top ten countries are Denmark, China, Switzerland, France, Taiwan, Germany, Japan, South Korea, Singapore, and Israel. These ten countries amount to 91% of the total. Following this top ten list are Indonesia, United States, Iran, United Arab Emirates, Turkey, Holland, United Kingdom, Italy, and Thailand, and adding their share raises the total to 96%. From these percentages, it is apparent that Latin America and the Caribbean countries have no significant impact on global transport.

The list below shows the top ten most extensive container lines in the world, based on TEU capacity handled as of June 11, 2020:

Collectively, these ten operators account for over 57% of the active vessel fleet and 86% of container mobilization capacity.

From data gathered by Clarkson PLC and UNCTAD, it is apparent that the slowdown in the Latin American and the Caribbean Shipping Industry will not influence global trade. The combined contribution of these regions to the worldwide maritime transport industry is too small to make an adverse impact.

How can we help you?

If you'd like to discover more about our company or our portfolio of services, you can find the right contact person here.

Team Transport & Logistics pride themselves on having an experienced and professional crew of staff & drivers.